GiadinhNet – On February 20, in Hanoi, West Asia Import & Export Co., Ltd. held a press conference and launched an exclusive distributor in Vietnam with the brand name Bahraman (Bahraman Saffron) made by Iran producer.

Saffron is one of the 10 most expensive spices in the world and a strong product of Iran. Bahraman, one of Iran’s largest Saffron manufacturers, has agreed to let West Asia Import & Export Trading Co., Ltd. in Vietnam become the exclusive distributor of Saffron products in Vietnam.

In recent years, the product of saffron has been searched and used regularly by Vietnamese consumers, but with a Saffron market with various types, unknown origin, and quality which have not been verified. This leads to consumers losing belief in this world’s most precious and expensive product since buying poor quality goods. 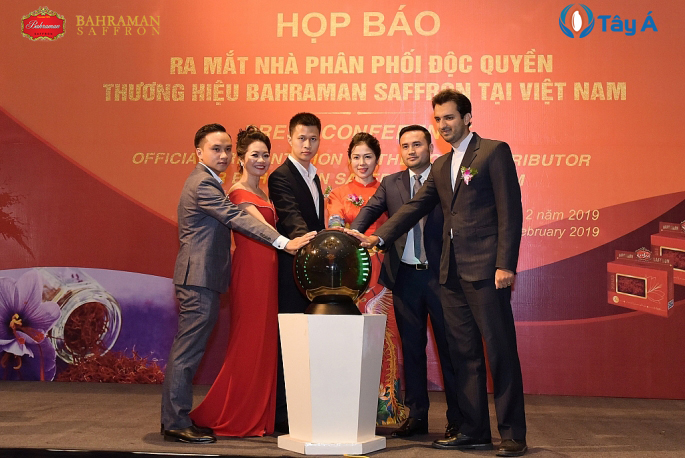 “By becoming the exclusive distributor of Bahraman Saffron, we hope to bring to Vietnamese consumers a product that is not only guaranteed in terms of quality, but also in price. Bahraman Saffron products all have anti-counterfeiting stamps and are packaged at the manufacturer with designs and weight to meet the needs of consumers. In addition, we asked Bahraman to continue designing and packing beautiful products that can turn Saffron into meaningful and attractive gifts ”, Mr. Do Van Tuan, Director West Asia Import Export & Trading Limited Company said.

“Iran-Vietnam trading relationship also has a lot of potential for expansion. It is very good news that Vietnamese businesses cooperate to develop with Iranian businesses. As a major Saffron producer in Iran, we hope that Vietnamese consumers will be satisfied with a health-promoting product made in Iran ”, Mr. Abbas abbaszadeh – Bahraman Saffron President stressed at the press conference.

Considered “red gold”, not only has a very expensive and precious price in the world, the Saffron of Iran, having been known for thousands of years, was adopted by the Kings and the Nobles in the past used as a spice, a kind of nourishment to foster health, and supported the treatment of a number of diseases. At the same time, it is used by the ancient palaces and beauties to beautify.